With no beating about the bush: in a Trentino paradise!

Our hotel in Molveno is situated on the shores of Lake Molveno in west Trentino, at the foot of the Brenta Dolomites and the Paganella mountain, at the most eastern point of the Adamello-Brenta national park.

The park, Lake Molveno and easy access to the peaks of the Brenta Dolomites have made Molveno a much-loved tourist destination for over a century. In Molveno, you can try your hand at a whole range of sports, including trekking, swimming, tennis, canoeing, fishing, bocce (boules) and even paragliding, for the more adventurous among you...

The Italian Touring Club has awarded the town of Molveno the orange flag, a mark of environmental quality especially for touristic inland towns and villages that stand out for their excellent range of activities and quality of hospitality.

Featuring in the Blue Guide (Guida Blu) of the best Italian beaches, Legambiente and the Italian Touring Club have also awarded their highest accolade - Five Sails - to the beaches of Molveno thanks to its beautiful shores with some 7 hectares of lawn.

If travelling by train, alight at Trento or Mezzocorona. In peak season, a bus service operates between Molveno and the train stations. Train timetable.
A bus service (last departure at 18.30 in the summer) connects Trento and Mezzocorona with Molveno (Trentino Trasporti tel. (+39) 0461-821000). Molveno is also connected to Riva del Garda, Madonna di Campiglio and Cles (Non Valley) with a change of public transport. See timetables.
However, if you want to come by car, our free car park is waiting for you! 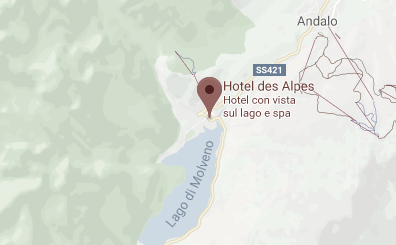 Cookies help us deliver our services. By using our services you agree to our use of cookiesDetails
Ok